Workloads running on top of Windows-based infrastructure still represent a huge opportunity for ‘the cloud’, specific applications like video-games development (Unity) rely heavily on the Microsoft Windows ecosystem to work and be used among developers and customers. Hence the need to provide a consistent cloud infrastructure for such Windows based software.

This post will show you how to deploy a Kubernetes cluster with Windows containers support, and what to expect from it.

The good, the bad and the ugly

From what is available in the documentation, the support for Windows workloads started in Kubernetes 1.5 (2017 ‘alfa’), and as a stable build on K8s 1.14 (2019), but even at the moment of writing this post, all the documentation, the container runtime support, and the CNI connectivity supporting this type of specific workloads is fairly limited. Before showing the actual 1-command deployment magic, this post will go through an brief review about what was needed, and what was done to have this ‘working’.

The following sections are an initial assessment of what is working, and how easy is to integrate these functional components in a more fashioned and automated way using Kubeinit.

It works!!!. With some specific limitations about the container runtimes that are supported, and the CNI plugins that have support for topologies like vxlan tunnels you can have something working once you know what is currently supported for your distro.

There are a lot of resources spread on the Internet that will give you an idea of what should work, and in some cases how-to deploy it.

This is the partial list of resources checked to finish the integration of Windows workloads in Kubeinit:

Code from the CNI Microsoft team:

Code from the Windows K8s sig:

Code from the CNI dev team:

It is pretty cumbersome to catch all the steps, ordering, and combinations of services that actually work. Also, the support for different distributions might lead to being forced to use i.e. container runtimes which at the moment are just not supported.

While reading about what to install and how to configure I ended up with situations like the next one. What’s the difference between sdnoverlay from microsoft/windows-container-networking and winoverlay from containernetworking/plugins remains unknown to me (mostly because of my limited time to dig into it with more detail), they are supposed to do the same, but there are plugins maintained by different folks with different names, so it created a little bit (or too much) confusion for me when doing this initial integration.

We assume by default that the components that can be consumed in their “stable” releases will just work. An example of this “not happening” is this, by default, I thought that the CNI plugin winoverlay will work “as-is” in Vanilla Kubernetes, because this same configuration is supported and working on OpenSHift and OKD. This assumption might not be true, at the moment of writing this post (July 1st, 2022), the support for containerD and Windows compute nodes in this GitHub PR is merged, but not released upstream (v1.1.1 does not have this change) so whatever you pull from the released versions will just won’t work…

Before going ahead, this section will briefly introduce Kubeinit’s architectural reference so you know ahead what is deployed, where, and how.

The picture above shows the legend of the main functional components of the platform.

The left icon represents the services pod, that will run all the infrastructure services required to have the cluster up and running, services like HAProxy, Bind, and a local container registry among others that will support the cluster external required services.

Now, we have a representation of the physical topology of a deployed cluster, the requirement is to have a set of hypervisors where the cluster nodes (guests) will be deployed, these hypervisors must be connected in a way that they can all reach each others (or having them connected in a L2 segment). Another assumed-by-default requirement is to have SSH passwordless access to the nodes where you are calling Ansible from. 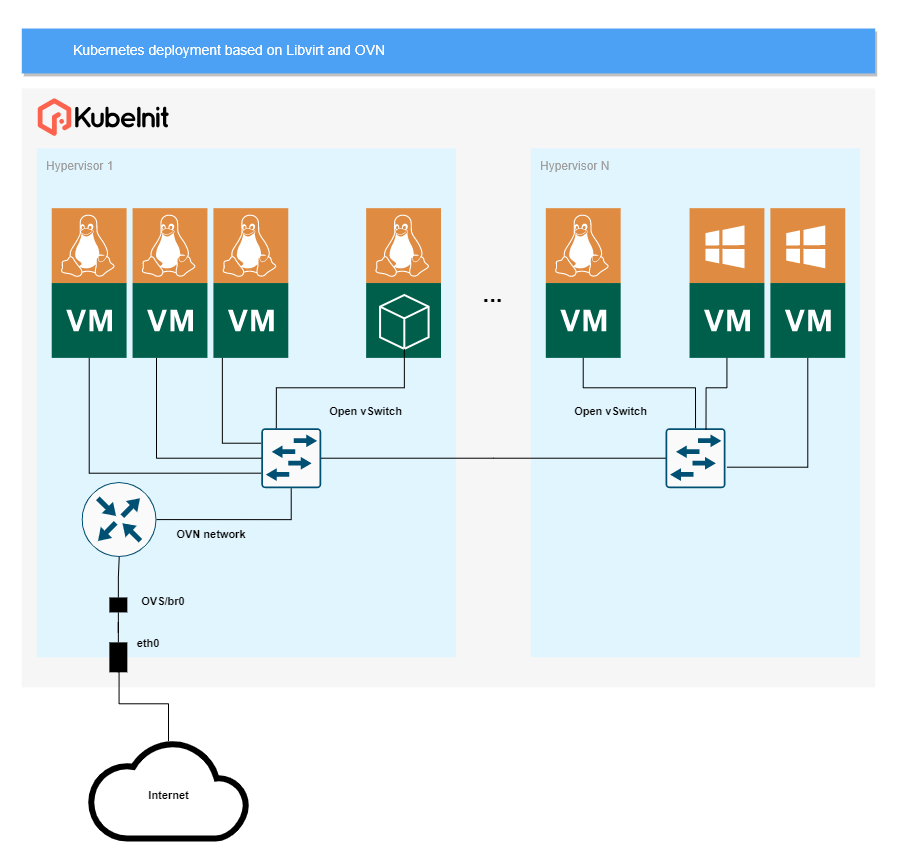 The logical topology represents a fairly more detailed view about how the components are actually ‘connected’ by allowing all the guests in the cluster (including the services pod) to be reachable without any distinction of what is deployed where within the cluster.

In this particular case, we have installed OVS in each hypervisor and by using OVN we create an internal overlay network to provide a consistent and uniform way to access any cluster resource.

With some context of what will be deployed from the previous sections, let’s go ahead and test this awesome cool feature in a magical 1-command deployment.

NOTE: Please check the complete instructions from the main README page, also, a good reference to know the hypervisor requirements is the CI install script there you will find what is required to set up the hypervisors based on Debian/Ubuntu/CentOS Stream/Fedora.

If you will like to cleanup your environment after using Kubeinit, just run the same deployment command appending -e kubeinit_stop_after_task=task-cleanup-hypervisors that will clean all the resources deployed by the installer.

NOTE: If you have an error when deploying the services pod like ‘TASK [kubeinit.kubeinit.kubeinit_services : Install python3] … unreachable Could not resolve host: mirrorlist.centos.org’ make sure your DNS server is reachable, by default it is used the 1.1.1.1 DNS server from Google, and it might be blocked in your internal network, run export KUBEINIT_COMMON_DNS_PUBLIC=<your valid DNS> and then run the deployment as usual.

The ‘new’ parameter present when running the Ansible playbook is called cluster_nodes_spec, this parameter allows to determine the OS (Operative System) of the compute nodes. There are still in progress some features to fully allow to customize the setup and decide how many nodes will be Windows based and how many will have Linux installed. The only supported version is Windows server 2022 Datacenter Edition. This Windows Server installation is based on the actual .ISO installer, so if a user want’s to use this in a more stable scenario they will need to register these cluster’s nodes.

Or even better, you can SSH directly into your Windows computes like:

The default IP segment assigned for the cluster nodes is the 10.0.0.0/24 network, where the IPs are assigned in order, first the controller nodes, then the computes, and the last IP for the services pod. In this example, given that the kubeinit_spec is k8s-libvirt-1-1-1 we will deploy a vanilla Kubernetes cluster on top of libvirt with one controller, one compute, and using a single hypervisor (explained in the same order than the spec content).

This same configuration is deployed periodically, you can check the status of the execution in the periodic job page

After having the cluster deployed, some considerations include determining from now on in the applications deployments the OS of the guests where the workloads will run.

The behavior I was able to see is that the Linux deployment tried to be scheduled in the Windows compute nodes, which at some point it just timed-out.

So make sure your deployments use the nodeSelector like:

While it was hard to make it work at first, having Windows workloads integrated into some of the use cases, proves how easy it was to extend Kubeinit’s core architectural structure with new types of nodes, and new types of workloads.

This new use case enables other types of workloads that might benefit other completely different usages of ‘the cloud’ we were used to seeing.

There might be still features not working properly or connectivity issues between pods as that is something I didn’t have time to properly test so far. The architectural diagrams are available online for further edits and references.

If you like this post, please try the code, raise issues, and ask for more details, features or anything that you feel interested in. Also it would be awesome if you become a stargazer to catch up updates and new features.

This is the project’s main repository.